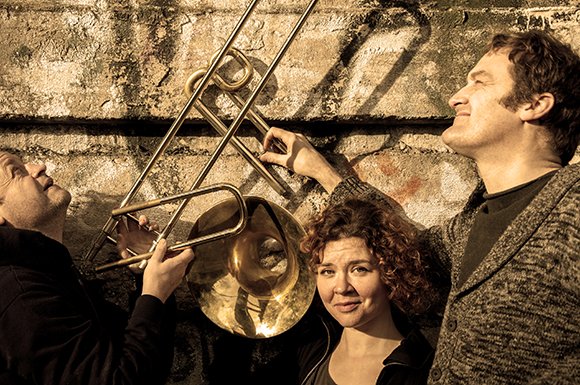 Zinc & Copper is a trio of horn, trombone and microtonal tuba distinguished by its innovative approach. Emerging from the current musical vortex of Berlin and having played at many of the major festivals there, including Maerz Musik, Club Transmediale and the Kontraklang series, Zinc & Copper has established itself as a pioneering voice of 21st Century music.Drawing on their experience in leading ensembles such as Arnold Dreyblatts’s Orchestra of Excited Strings, CC Hennix’ Chora(s)san Time-Court Mirage and Reinhold Friedl’s zeitkratzer, each musician is a recognised virtuoso, distinguished by their creative musical abilities.For the “Well Tuned Brass” tour in October 2016, Zinc & Copper bring new work to audiences in Austria and Italy, based on their exploration of tuning systems, language articulation and improvisation. Central to their programme is Robin Hayward´s new composition “Words of Paradise”.This tour sets the stage for Zinc & Copper’s activities in 2017, featuring premieres of new work by Ellen Arkbro, Amir ElSaffar and Eliane Radigue.
http://www.zincandcopper.org