Evangelista (us) / Broken Heart Collector (a) 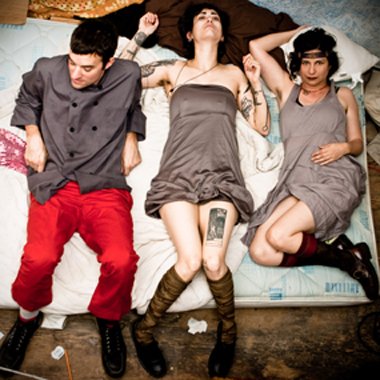 Carla Bozulich is best known as the singer from LA-based band Gerladine Fibbers and as the woman who re-made Willie Nelson’s Red Headed Stranger — with Willie Nelson as a special guest. Carla has one of the most unique voices in any genre. Her work is at once brutally raw and weirdly visionary. Born in New York City, she grew up a tomboy and girl protector in San Pedro, CA. Carla’s first appearance on record is Gary Kail’s album from 1982 called Zurich 1916, on which she does dada-inspired worldplay, “you know, telephone and vacuum cleaner stuff”. She sang in a couple of groups – the Neon Veins and Invisible Chains, the latter of which recorded an album for The Minutemen’s New Alliance label when Carla was 18 years old. Carla disappeared from daylight for a few years, re-emerged, and was soon causing traffic jams as the gamine howler in the confrontational sex/sound assault outfit Ethyl Meatplow. In 1993, before Ethyl’s last gasp, Carla founded The Geraldine Fibbers, going on to record and tour incessantly with that band until 1998. Scarnella followed, a duo formed with Nels Cline, and a decidedly uncommercial, open, experimental project. In 2001 she scored a Los Angeles production of Jean Genet’s The Maids and the award-winning feature film By Hook Or By Crook, which she also scored and for which she compiled the soundtrack, went to Sundance in 2003. That same year saw the release of Carla’s new rendition of Willie Nelson’s Red Headed Stranger. She has also explored mixed media and performance art, including a commission for The Getty Museum in Los Angeles. In 2005 Carla rekindled a decade-old connection with Montreal-based musicians affiliated with the Constellation label, leading to a recording at that city’s legendary Hotel2Tango studio, and the release of her Evangelista album on Constellation. Received with high critical praise, the record would find its way onto many year-end best lists, and lead to extensive touring around Europe and North America, including performances at the Festival International de Musique Actuelle de Victoriaville (Canada) and Bad Bonn Kilbi (Swizterland) among others. In 2007, Evangelista became the official band name of Carla’s project, and her follow-up record for Constellation was once again recorded at the Hotel2Tango in Montreal, with core co-conspirators Tara Barnes and Shahzad Ismaily, and contributions from a large cast of Montreal-based musicians. The first record bearing Evangelista as a band name was called Hello, Voyager and came out in February 2008. Subsequently, Evangelista landed on the cover of UK music magazine The Wire in June 2008, and Hello Voyager also made that and several other mags’ year-end lists. Bozulich/Evangelista continued to tour tirelessly in Europe and North America after the Hello Voyager release, including appearances at Le Weekend in Scotland and the Ruhrtriennale in Germany (with Carla in collaborative performance with Marianne Faithful and Marc Ribot). Since 2008, Evangelista has coalesced around a core trio, with Bozulich and bassist Tara Barnes now joined by keyboardist/sound artist Dominic Cramp. Montreal sound-artist Lisa Gamble is also a regular contributor to Evangelista’s writing and recording, and has occasionally joined the band on the road. The spring of 2009 found Carla, Tara and Dominic in Montreal, once again recording at the Hotel2Tango studio where the previous two albums were made. Their latest record Prince Of Truth (release – October 2009) is Evangelista’s strongest work to date, and includes a wide cast of friends and guests, including Shahzad Ismaily, Ches Smith, Jessica Catron, Nels Cline, Devin Hoff and Montrealers Thierry Amar (Silver Mt. Zion) and Nadia Moss and Jonah Fortune (Witchies). Evangelista’s latest album, In Animal Tongue, was released 20 September 2011.