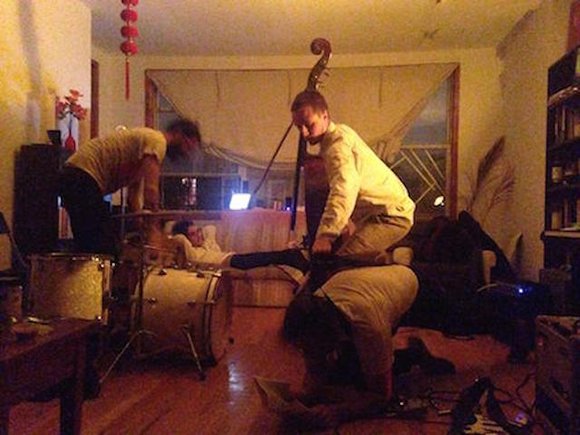 Cop Tears is a trio of Derek Baron, John Andrew Wilhite, and Cameron Kapoor. CT plays exploratory improvised music as well as interpretations of chamber music from the American canon in the interest of troubling and questioning that canon.

Thirteen Harmonies is a selection from John Cage’s 44 Harmonies From Apartment House 1776, written for the American bicentennial, which itself is a selection of pieces in the colonial and early American choral canon. Arranged for double bass, electric guitar, and flute, from the arrangement for keyboard and violin, from the original four-part chorale, Thirteen Harmonies is an arrangement of a reduction of an arrangement of a reduction. The choral composers whose works were the material for Cage’s Apartment House were considered the avant-garde of choral music of the 18th century, and their music became the seed of Sacred Harp music, a radical lay tradition of the rural American south. John Cage composed the harmonies by way of erasure of the Protestant chorales and set them in an “apartment house” among other American voices: Native American ritual music, slave spirituals, and Sephardic incantations. What binds the lay experimentalism of William Billings and his contemporaries (all white American men) to the ‘multiplicity of centers’ of the Apartment House of John Cage (a white American man) is the destruction of a privileged musical space, the making-permeable of the division between the music of the piece and the sound of the people coming together to make the music of the piece. A positive destabilizing from within. Thirteen Harmonies was recorded live on two consecutive mornings in 2016 to a faulty 4-track on bled-through tape in Cameron’s apartment house in Queens, New York.

The roots of this performance is to play the sympathetic resonance of the room structure, individually sculpted according to its architectural singularity, and which the plot of the show remains permeable to the immediate moment, using exclusively acoustic methods of production and governed by motions which implicate the full motor capabilities of the body.

My first challenge to produce a continuous sound wiht a percusif musical instrument, evolved through an investigative process of the acoustic gifts of the performance space. A large drum is used as a vibrational amplifier, with varied implements rubbed on the skin to activate its vibrational potential. These implements are positioned beforehand around the drum for access in my circular walk. After having personally developped this technique for eight years, I’ve highlighted three key elements in the interrelationship :

.The atmospherique conditions of the space volumes for their influence to the vibration propagation. .The regularity of the ground leveling .The specific nature of audience and the energy which emanates from the venue. ( Energy in the etymological sense of the word “force in action”.)

Today my knowledge of materials and shapes allow me to produce sound vibrations that are often compared to some particular sound of synthesizers. However, the physical perceptions of my sounds, have nothing similar to those issued by a speaker. We are no longer in that frontal relation with the sound wave emitted by the menbrane. The immersion phenomenon in the sound material is no longer dependent on the power of sound system, but by the resonance of surrounding structures.

From larger through to smaller scales, all turns around an axis. Mine, during the performance it’s the horizontal drum. The focus of my rotations is consciously refer to ancetrals rituals used by numerous culture and civilization and called circumambulatoin sinistrocentrique.