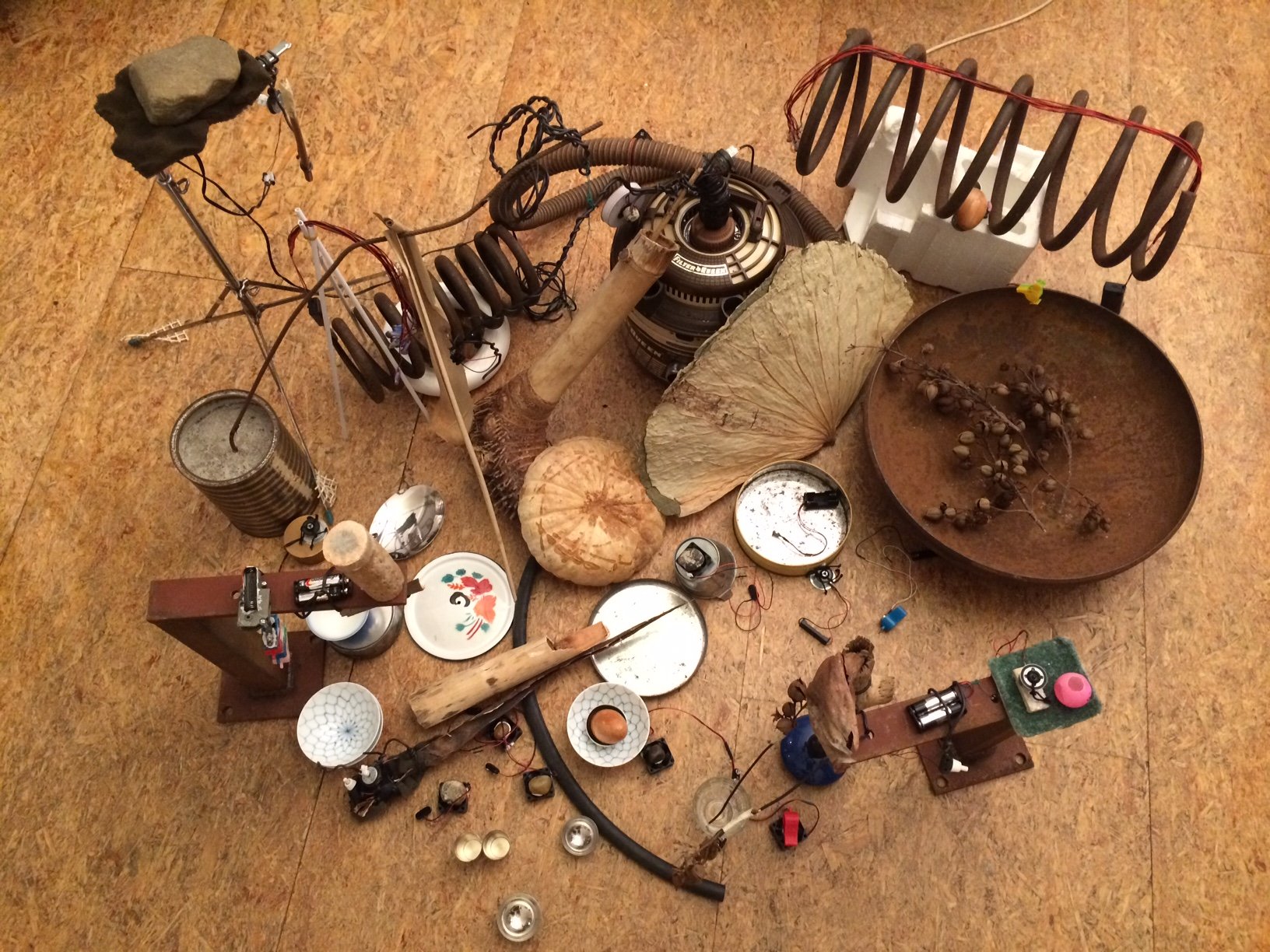 RN and PB have been creating various ways to vibrate things so that their acoustic shadows dance around: invisible air volumes that reshape constantly, move in the space, enter in the most secret places and inside ourselves. A way to get closer to things inherent spirits is to listen to them. Eventually encouraging them to produce sounds and resonate by various means: to hit, caress, shake, beat, scrape, scratch, claw, boil, clap, rattle, rock, throw, move, magnetize, clamp, cook, pinch, galvanize, motorize, bow, blow, pluck, heath up, let flow, freeze, drop, drip, connect, roll, mix, extend, sing…

David Toop about a performance by Rie and Pierre

“Das ganze Doppelalbum” is the first solo release of Gigi Gratt aka Gigaldi. Since 2005 Gratt plays in intense bands like the improvisation trio Nirwakia with Wolf Lobo Eisberg & Martin ‘Hipi’ Hiptmair. At the same time he started with Bernhard Breuer (Elektro Guzzi) the band Tumido. But Gratt also created Gigi’s Gogos, a 13 piece orchestra built around improvisation conducted by Gigi. This project transferred into the GIS Orchestra, an Upper Austrian improvisation orchestra, with up to 30 musicians (organised in collaboration with Waschaecht Wels (Unlimited Festival). Gratt comes from Ottensheim, he is one of the key pillars of Ottensheim Open Air and organises shows for KOMA, a culture association doing shows at changing spaces. He is playing E-Guitar in the post-math-rock quartet of NI, next to BRAAZ a quartet between Jazz & Noiserock, with a lot of space for improvisation. These days Gratt is also playing at DRUMSKI a collective working in a traditional way with (upper-)austrian proverbs. And if he is not involved in new projects, his next other band is ROMANOVSTRA working in a new way with hungarian proverbs.

In 2015 Gratt transferred the idea of a concept recording having every season one piece, giving each season its own instrument. This was also the time he has chosen GIGALDI as his moniker. In winter 2013 he recorded, like every track on “das ganze Doppelalbum”, “winter” in Ottensheim with E-Bass, a dark, close to 16 minutes song. On “frühling”, Gratt uses the flugelhorn, a following composition of TUMIDO’s album “vakuum”, that was completely recored using wind instruments. On the 2nd LP, “sommer” was recored in Schrattenberg in 2016, Gratt uses the Tres, a cuban string instrument and “herbst”, with E-Guitar, he recorded in a gym hall with an amzing acoustica in Vinac, Bosnia. His Tumido fellow Mario Stadler mixed the album at the Goon Studios / Linz / Austria. Mastering done by legendary Alexander Jöchtl aka Audiobomber.

The artwork was done by artist Inga Hehn. The liner notes in the album, are written bei Andreas Fellinger of the Austrian Independent zine “Freistil”. Released by Interstellar Records, that collaborated with Gigi for more than 10 Years resulting in the releases of TUMIDO, NI and BULBULTUMIDO.