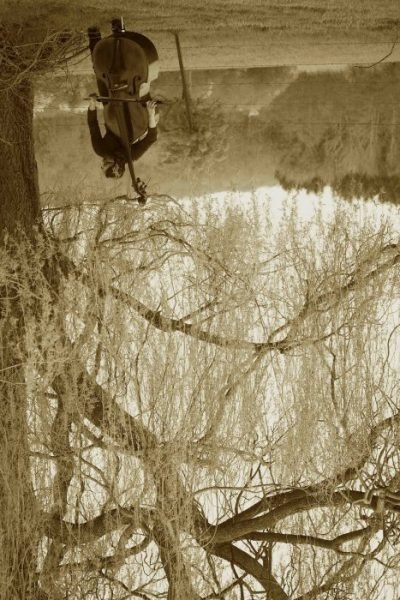 An organic engine shakes the ground and the bodies all around..

Shining water surface.
Aqcuatic plant spirals.
Forest of bones.
Immerse in a dance of wawes, sliding between thousand of possible variations within a slow and continuous movement.

The rumble of a boat along a black river.

Marco Quaresimin solo works are focused on relations between sound, time, space and movement. He has been playingsolo concerts since 2011, exploring different forms, from free improvisation to graphic scores, from free jazz-like explosions of energy to very calm and contemplating minimalistic long form. He has performed in Italy and France in theaters, art galleries and open-air events. His new performances are based on the balance between continuum soundand constant micro variations, with a specific focus on breath. They are sensory experiences which explores the visceral quality of the sound with the listener, opening up a communication between the resonance in our human bodies and the vibrations of the space.

Biography: Double bassist and bassist Marco Quaresimin started to play different jazz forms with the musicians of the northern Italy creative scene (A.I.R.E. El Gallo Rojo Records) at the age of 18. He developed then his vocabulary as a free improviserworking regularly with the percussionist Roberto Dani, and meeting between Italy and France Jöelle Léandre, MatsGustaffson and Tristan Honsinger. In parallel to this he had a rich and varied academic education in both the Rovigo (Italy) and Evry (France) conservatoires. He has also continuously followed body and vocal practice workshops. Now based in Paris, he plays in, amongst others bands, with the minimalistic trance music trio Tripes (COAX Recrods), with wich he had a tour in Europe in 2015, and the jazz quintet Healing unit (Futura -Marge Records). Thinking about connections with other disciplines as a source of inspiration to enrich and precise his artistic universe, he’s involved inprojects in different areas. In the the field of dance the group Tripes collaborate on choreographic performances with Claire Malcrowicz and Flora Gaudin under the direction of Marine Mane; in theater with the musical for children Un ourse of cOURSE alongside Lawrence Williams and Alice Zeniter; in cinema playing Noma Omran’s music for the Ossama Mohamad’s films, like Eau Argentée, presented at the Cannes festival in 2014. In circus composing and playingthe music for the Tanmis company’s rchitectonic circus show. S pace S.